Are Children Allowed to Testify in Family Court? 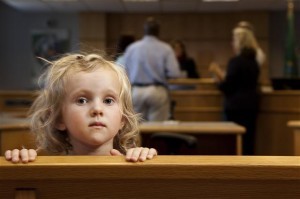 If you're in the midst of an especially heated child custody case, it might seem like a good idea to involve your children in the dispute. For instance, you might think that their opinion could sway the judge or provide additional support for arguments you have made against the other parent. But is taking this approach really a good idea?

Are children allowed to testify?

The short answer is “very rarely, if ever.” Family Court Rule 23 governs the presence or testimony of a child, and its requirements and provisions generally preclude children from testifying in custody cases. Subsection (a) of this rule states “Generally, in actions of parents against each other, or where the conduct of either parent is an issue, the children should not be allowed in the courtroom during the taking of testimony.” Subsection (b) states “Children should not be offered as witnesses as to the misconduct of either parent, except, when, in the discretion of the court, it is essential to establish the facts alleged.”

How is the testimony taken?

In those extremely rare cases in which the Court determines that it is necessary to hear from the child, the Judge has the discretion to get this information in one of several different ways. First, the testimony could simply happen in open court, like other witnesses, with the child being asked questions by the opposing attorneys.

Instead, if the Court decides that it needs to hear from the child, this is almost always done through an interview in the Judge's chambers. Family Court Rule 22 states “In all matters relating to children, the family court judge shall have the right, within his discretion, to talk with the children, individually or together, in private conference. Upon timely request, the court, in its discretion, may permit a guardian ad litem for a child who is being examined, and/or the attorneys representing the parents, if any, to be present during the interview.”

Again, it cannot be overstated how very rarely either of these actually take place. In almost two decades of practicing in Family Court, I can count on one hand the number of times I have seen either of these take place (and I will have a few fingers left over).

Experts universally agree that having children testify in a child custody cases, especially when that testimony is seen as being for or against one parent, can be profoundly destructive. Forcing a child into making a choice between his/her parents can cause damage that lasts for years into the future, and it should be avoided if at all possible.

What if testimony is required?

In those extremely rare cases where the Family Court Judge determines that it is necessary to hear from a child and there are no other alternatives, experts recommend the best way to go about this is: (a) be sure that the questions are limited to objective facts, such as who, what, when, where, and why; (b) merely get a record of what happened and don't force the child to relive traumatic experiences in great detail; and (c) remember that the goal, if testimony is required, is to minimize the potential destruction faced by the child.