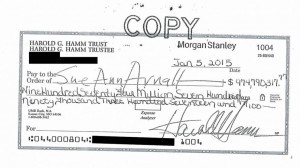 In an unexpected turn of events, Harold Hamm, the billionaire founder of the oil company Continental Resources, managed to wrap up his billion dollar divorce a few weeks ago – something many thought was impossible given the legal positions staked out by Harold and his ex-wife Sue Ann. Thanks to Sue Ann's decision to cash a hefty check from her ex-husband, the nasty divorce that had stretched on for several years will now come to an end.

According to news reports, the case took its first surprising turn earlier this week when Harold offered to write Sue Ann a check for $975 million ($974,790,317.77, to be precise), the balance of what he owed her after an Oklahoma judge settled the divorce late last year. Though Harold was given years to slowly pay off the balance, he decided he would rather wrap things up quickly, presumably in an attempt to end the continued disputes with Sue Ann.

After the massive check was delivered to his ex-wife, Sue Ann's attorney then publicly revealed that she would not be accepting the money. The lawyer claimed that Sue Ann would instead contest the initial divorce award and that accepting the check would prevent her from moving forward with her appeal.

Thankfully for Harold, he never bothered to put a stop payment on the check. This gave Sue Ann time to rethink her decision, ultimately changing her mind and rushing off to the bank. In a surprising twist, the check was deposited into Sue Ann's account and the divorce appears to finally be moving to a conclusion. Next time you worry about the cost of your divorce, think back on Harold Hamm and his billion-dollar check and breathe a sigh of relief.