Can $1 Million a Month in Child Support Ever Be Fair? 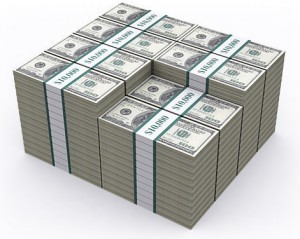 Everyone knows that parenting can be an expensive endeavor. You've got to pay for new clothes, food, schooling and many other minor expenses that seem to always crop up. How much are we talking about exactly? A few hundred dollars a month? A thousand? A few thousand? Not according toAnne Dias Griffin, who is asking her ex-husband to fork over $1 million a month to support their three children.

Anne, a former hedge fund manager who quit her job to be a stay-at-home mother, is asking that Ken Griffin, CEO of a major investment company, fork over the astronomical sum for the foreseeable future to support their three kids, a two-, four- and six-year-old. Though the amount may seem unimaginable, it is likely not as ridiculous when you consider the wealth of those involved. Ken has an estimated net worth of $5.5 billion. Anne has already secured $40 million under the terms of her prenuptial agreement. In this context, $1 million seems slightly more understandable.

So how does Anne arrive at such a large number? She didn't just pull it from the clear blue sky; she instead drew up a “budget.” According to Anne and her lawyers, monthly child support includes an estimated $6,800 for groceries as well as $7,200 for eating out. Anne will also need to pay $60,000 a month for office space and professional staffers, including four nannies to manage the three children. Some of the bigger expenses involve travel and vacation, including $160,000 for vacation and $300,000 for use of a private jet.

Though family court judges are sympathetic to income inequality and will occasionally take steps to equalize these lifestyle differences by awarding increased child support to the “disadvantaged” spouse, it will be an uphill battle convincing a judge to sign off on $1 million a month. At the end of the day, children can survive and even thrive without their monthly private jet time.

Source: “$1 Million a Month in Child Support? Inside a Billionaire's Nasty Divorce Battle,” by Jennifer O'Neill, published at Yahoo.com.