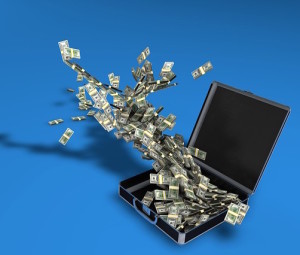 It's sad, but some people behave badly when going through a divorce. Considering there are often so many emotions, hurt feelings, disappointments, and anger that are often wrapped in a divorce, it isn't uncommon for a husband or wife to act out and start spending or wasting money in an attempt to hurt the other party. In other cases, marital funds often get wasted on affairs, substance abuse, or on spending sprees, and that money must later be accounted for during the divorce proceedings. So what happens when such bad behavior occurs? How do courts account for wasted marital assets? Keep reading…

What is dissipation of marital assets?

Dissipation of marital assets occurs when marital funds are spent frivolously or unjustifiably by one spouse. However, this involves more than just poor money management. To rise to the level of dissipation, the spouse must have acted intentionally. For example, this would include things such as a husband buying expensive gifts for a mistress or a wife maxing out credit cards on a revenge spending spree. Both are examples of intentional wasting, because the assets that were spent would have otherwise been distributed in the couple's divorce.

What happens in the event of dissipation of assets?

The Family Court can do several things when dissipation of marital assets occurs, and exactly what happens will depend on the particular facts of the case. Different states also handle this issue in different ways. Some spread the costs between the parties, while others forcing the responsible party to bear the brunt of their mistake. In South Carolina, when one spouse wastes marital assets on an affair or other similar situation, the court will typically reduce that person's property award in the divorce to reimburse the innocent spouse.