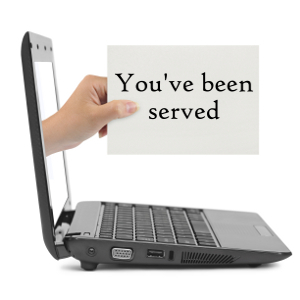 A very important divorce case out of New York was recently decided that could impact how divorce is handled in the Internet era. The ruling, by Manhattan Supreme Court Justice Matthew Cooper, allowed a woman to serve her husband with divorce papers viaFacebook.

The case began when Ellanora Baidoo, 26, wanted to divorce her husband, a man who had become nearly impossible to track down. The two had been married for a little over five years, but they had lived apart for much of that time, with Baidoo only knowing the address of an apartment her husband last occupied in 2011. However, the two remained in touch, largely by text message and Facebook.

Baidoo was ready to move on with her life, but had no idea how to locate her missing husband. He refused to provide a fixed address, had no place of employment and would not make himself available to be physically served by divorce papers. Baidoo and her attorney exhausted all possible options to track the man down: the post office had no forwarding address, there was no billing address listed on his prepaid cell phone plan, the DMV didn't have any records. Even a private detective tried and failed to locate him.

Finally, the lawyer decided to try a novel approach: service by Facebook message. The judge agreed that the unconventional approach might work in this case and granted permission to Baidoo to serve the divorce summons on the defendant using a private message on Facebook. The transmittal was required to be repeated by the plaintiff three times over the course of three weeks or until acknowledged. So far, Baidoo says her husband hasn't responded, but the ruling opens up an entirely new avenue for service that might lead to big changes for divorces across the country.

Will South Carolina begin to allow service of divorce pleadings via Facebook? Probably not anytime soon. However, it is interesting to see how other states are beginning to adapt to the technological advances and incorporate them into the legal process.

Source: “Divorce papers can be served via Facebook, N.Y. court rules, if that's the best practical alternative,” published at WashingtonPost.com.