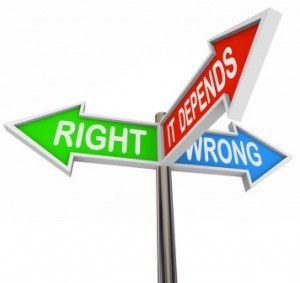 A Texas judge recently issued a surprising ruling saying that a lesbian couple in the court's jurisdiction was not allowed to live together because of a “morality clause” contained in the divorce decree of one of the women.

Such divorce morality clauses are common, not only in Texas, but also in South Carolina. They are designed to act as a legal means of keeping a divorced parent from having a future romantic partner spend the night while children are in the home.

In many cases, the way to get around that provision is simply to marry your romantic partner as morality clauses cannot prevent you from cohabiting with a spouse. However, in Texas (and many other states), marriage is not an option for homosexual couples, so the lesbian partners have no way around the strict language contained in the divorce decree.

In the Texas case, Judge John Roach heard the dispute about the 2011 divorce decree of Carolyn Compton, and he ordered Carolyn and her female partner, Page Price, to move out of their shared home. Compton's ex-husband brought the issue before the court because the two women cohabited in a house along with their two daughters. Compton's ex argued that the morality clause contained in their settlement agreement was gender-neutral and that it should be enforced for the benefit of the children.

Compton's attorney argued that the morality clause was unconstitutional, not only for gay couples, but straight divorcees as well. They claimed that the law unreasonably limits parents' abilities to make their own lives.

On the surface, the thought behind a morality clause may seem like a good one: to protect children in a South Carolina custody case from a revolving door of romantic partners, only to have them disappear from their lives in short order. Obviously, such conduct would be detrimental to the children, though exactly how damaging and to what extent is hard to know.

However, the problem with such morality clauses is that there are far too many loopholes in even the tightest of clauses. Further, they simply can't stop the children from being introduced to new significant others in a parent's life. Finally, the clauses allow yet another intrusion into the lives of a couple who have likely already had intimate details paraded before a room full of strangers.