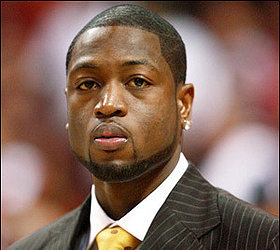 In what is perhaps a cautionary tale for how divorce expenses can get wildly out of control when couples become embroiled in senseless fighting, recent reports in the Miami Herald indicate that basketball star Dwyane Wade will end up shelling out at least $10 million just in legal bills related to his divorce.

Mr. Wade is supposedly paying a dozen or so lawyers across two states (Florida and Illinois) that are involved in the split from his high school sweetheart Siovaughn Funches. Two of the attorneys commented on the case to a Miami gossip website, saying that last year alone nearly $8 million was spent on attorneys.

Experts say that if the numbers are true, Mr. Wade is spending more money on his lawyers than he is on his wife. Though everyone agrees the case is likely a complicated one given Wade's wealth, most say the enormous costs are due to the fight in his case becoming so personal.

Wade has apparently set up a separate account funded with endorsement money to pay the legal fees of himself and Funches. So far, multiple motions have been filed by both parties, running up the tab in Florida and in Illinois where Funches currently resides. Wade has also filed a defamation suit against Funches after she claimed that Dwyane Wade left her homeless – another tactic that is likely driving his legal expenses through the roof.

While it's understandable that individuals facing a contentious South Carolina divorce might want to fight for their fair share of marital assets, it's crucial not to let your emotions get the best of you. Though Mr. Wade and his soon-to-be ex-wife likely have lots to be angry about, their legal battle is benefiting no one but their attorneys. The $10 million spent having lawyers respond to “tit for tat” legal motions represents $10 million less money for the couple to divide amongst themselves.

While most couples in South Carolina don't have Dwyane Wade's money, the same lessons apply. Wise spouses try to keep hurt feelings out of the divorce process as much as possible and stick to resolving the important issues concerning finances and child custody. The more divorce becomes about settling scores, the more likely your legal bills will balloon out of control.