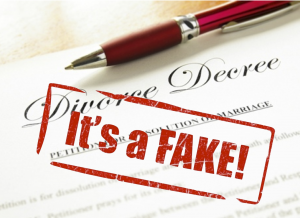 Who knew creating fake divorce papers was so common? In a case that is very reminiscent of a recent South Carolina episode, a man from Pennsylvania just got busted after forging a family court judge's signature on a divorce decree. According to authorities, the Pennsylvania man apparently engaged in the forgery and fake divorce decree in an effort to trick the mother of his new (and much younger) girlfriend.

Court documents recently filed in the case say that 55-year-old Louis Divido forged the signature of family court Judge Thomas Swope on a fake divorce decree to prove to his girlfriend's reluctant mother that his previous marriage was officially over and done. The woman's daughter was 27 years younger than Divido, and her mother was evidently (and rightfully) concerned about the man her daughter had taken up with.

Police say Divido was a resourceful trickster and took himself down to a branch of the public library, where he printed out a draft divorce decree and then forged the name of a local family court judge. In reality, his divorce is far from final, and the forgery attempt only landed him in even hotter water. Divido is now being prosecuted for forgery by the district attorney's office, which has brought to light some unsavory incidents from his past that landed the man on the state's sex offender registry.

In the South Carolina case from early April, Edward Brown found himself facing criminal charges for forging his divorce papers. In Brown's case, the documents were meant to fool his girlfriend, not her mother. Police say Brown used a computer program to alter the documents, placing the signature from his first divorce onto documents pertaining to his second wife. Brown then mailed the papers to his girlfriend, who was unconvinced and took them down to the courthouse in Dorchester County where the fraud was uncovered. Brown now faces three years in prison for his trickery.