When Getting Married Is Considered A Crime 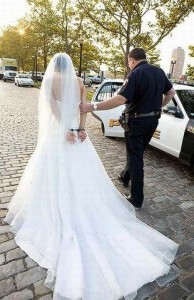 Although most people think of marriage as a time of happiness and cause for celebration, there are certain circumstances where marriage might instead be cause for alarm. A recent incident in New York where a woman was arrested for getting married too many times demonstrates that marriage can not only be bad, but sometimes even criminal.

The case in New York involves a 39-year-old woman named Liana Barrientos. Liana's web of lies began to unravel last year when she married “lucky” husband number 10. While filling out her marriage paperwork, she signed a document swearing that this was her only marriage and that she had never been married before. A detective happened to look into this claim after being flagged by a courthouse employee. The investigation revealed that Liana had a much easier time saying “I do” than saying “I don't”.

The detective discovered that in the span of 11 years, Liana had been married 10 different times to 10 different men. At no point during these 11 years did she ever divorce any of them. Even more amazing, there was one span of 6 months where Liana was especially busy, racking up 6 marriages between 1999 and 2000.

Police say they don't yet understand the woman's motivation, though they are actively looking to find out if she financially benefited from these arrangements. In the meantime, Liana is contending with serious criminal charges. She's been charged with filing a fraudulent marriage license application. She is due in court to answer two of these false instrument charges, each of which comes with a maximum prison sentence of four years. If Liana's doesn't illustrate the importance of hiring a good divorce lawyer, nothing does.

Source: “Bronx bride gets married 10 times — without ever divorcing: officials,” by Ben Kochman, published at NYDailyNews.com.