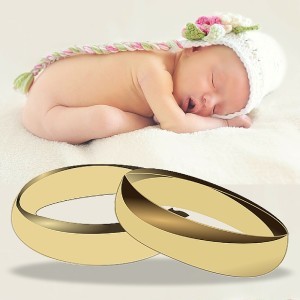 Sociologists have long thought that having a baby before marriage results in couples having dramatically higher rates of divorce than those who wait and have children after marriage. This difference was often of interest to researchers who sought to figure out what exactly led to the difference in marital success rates.

However, a recent study now indicates there is no difference in the success of a marriage based on whether kids were born before or after the wedding. The study, funded by the nonprofit group Council on Contemporary Families, followed two groups of parents: (1) those who had their first child between 1985 and 1995, and (2) those who had their first child between 1997 and 2010. The two groups were compared against one another, with the researchers looking to see the marital success rates for couples who had kids prior to marriage and those who waited until after.

Researchers say that the study indicates that society's view about conceiving children before marriage has changed rapidly and that it is no longer seen as a bad or alarming thing to get pregnant prior to marriage. As a result of the shifting societal view, couples may no longer feel pressure to rush into a shotgun wedding and are thus able to take things more slowly and minimize their risk of an eventual divorce.