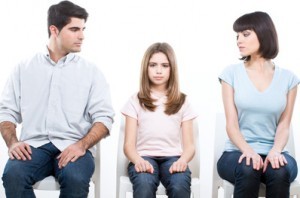 Many people wonder how divorce affects children. It can impact them in a multitude of ways: some are scared, others angry, others confused. As a parent, it can be a struggle to know how best to help your kids through this emotional time, which can add to your own anxiety. One thing that experts agree on is that divorce affects children of different ages in very different ways.

Though many parents might think toddlers are too young to understand the turmoil of divorce, experts say that the limited cognitive ability of most toddlers does not spare them from the pain of the split. Toddlers are often confused about why the family has changed around them, and it can be difficult to make them understand why one parent has suddenly disappeared. Toddlers can also internalize the pain of divorce, blaming themselves out of confusion, sometimes leading to deeper emotional pain later in life.

Young children experience divorce differently than their younger brothers and sisters. Kids between the ages of 6 and 12 often view divorce through their own eyes, blaming themselves for the troubles in their parents' relationship. Though older and wiser, children in this age range still lack the emotional maturity to express their worries, and they can often bottle up fears about how their life will change as a result of split – leading to stress and anxiety. Additionally, young children also often hold out hope that their parents will eventually reconcile, something that can delay the healing process.

Teens are more likely than younger children to act out after a divorce. Though more emotionally sophisticated, teens often feel distant from their parents, an issue made worse due to the strain of a divorce. Teens who are angry or sad can turn those feelings into bad behavior, disobeying parents and teachers, becoming withdrawn, aggressive or even needy. School is often a place where teens act out and can serve as a lens through which to view their changed behavior.

Though it may not solve the problem of children being impacted by divorce, knowing what to expect gives parents a chance to react to problems before they mushroom and take action to get their children the help that they need.

Source: “The Impact of Divorce on Children,” by Gail Gross, published at HuffingtonPost.com.