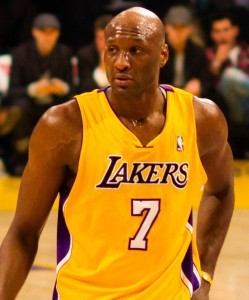 As you may have read, NBA player Lamar Odom remains hospitalized in Nevada after being found unconscious in a brothel. The tragic case has captured the media's attention and resulted in stories about Odom's troubled life. Previous drug use and accusations of infidelity have been replayed and seen as a precursor to the sad incident where police reports indicate Odom was found foaming at the mouth late one night at the Love Ranch in Pahrump, Nevada.

According to reports, Odom was initially in a coma and unable to make decisions about his care. The Los Angeles Times reported that this may result in Khloe Kardashian making important decisions about his treatment, including how long Odom should continue to receive life-sustaining support. Fortunately, Odom has emerged from his coma, but his situation serves as an important reminder for those going through a divorce.

Odom and Kardashian were married in 2009 and had a tumultuous relationship. Kardashian finally had enough and filed for divorce in 2013. The case slowly made its way through the court system and was even in danger of being tossed out of court in 2014 due to inactivity. Finally, this July, both sides signed the divorce decrees, finalizing all the paperwork needed for their divorce to become official.

So if that's true, then why would Khloe Kardashian still be able to make crucial medical decisions for Odom? Because though Kardashian and Odom did their part by signing the paperwork, a backlog of cases has thus far prevented a judge from reviewing the documents and signing off on their divorce. That means that their divorce, though almost there, is not yet official. As a result, Kardashian still has all the same benefits and powers that a wife would have in a situation where her husband was incapacitated, leading to a somewhat strange situation where an estranged spouse is left with the responsibility of making major medical decisions.

Family law experts say this case is an example of why it is important to craft healthcare powers of attorneys and keep these documents updated, especially when a divorce is underway. Should you experience a medical emergency during or immediately after a divorce, before having a chance to update your power of attorney paperwork, your former spouse may be left in charge of your care, something you may not want. To ensure this doesn't happen, update all estate planning documents and name someone other than your former spouse.

Source: “Lamar Odom and Khloe Kardashian are still married — as usual, it's complicated,” by Christie D'Zurilla, published at LATimes.com.