Look Out for Hidden Money in Divorce Proceedings 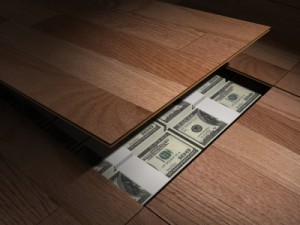 A recent article in Bloomberg dealt with the issue of finding money hidden by one spouse in a contentious divorce proceeding, and it featured Mark Kohn, a forensic accountant who has made a career out of locating money that one spouse or another squirreled away.

The article discussed how spouses in the midst of their cases can sometimes become allies with the IRS when it comes to tracking down hidden money in divorce. The forensic accountant explained how money often gets hidden in cases where one party owns or operates their own business, which gives them direct access to sometimes large amounts of money, often with little oversight in terms of how they use that money.

In some cases the cheating spouse may decide to start hiding money to avoid paying money to the IRS. Though the other spouse may not be directly harmed by this action, experts say it's only a matter of time until the same secretive financial behavior turns on the spouse. In one especially egregious case, Kohn says he helped expose a man who owned his own company and reported an official salary of $500,000. The wife knew this could not be true and Kohn eventually uncovered that the real income was close to $2 million per year. The husband had been hiding the extra $1.5 million as a fake business expense and pocketing it. The revelation meant that not only did the wife walk away with much more money than she would have, but the IRS was waiting in the wings to take their turn extracting back tax money.

Kohn says that while some cases of financial misdeeds are sophisticated and involve using complicated techniques to hide income as expenses, others are amateurish. He says cases involving largely cash-based businesses are notorious for hidden money. Also, cases where business profits suddenly take a nosedive right as a divorce appears imminent are suspicious, even though often seen by experienced South Carolina family law attorneys and judges.

Kohn says that while it can be tricky for the spouse who is not involved in the business to notice financial wrongdoing, most people know when income is significantly underreported. Kohn says a spouse who may not be involved in the family's finances should look carefully at the financial disclosures provided by their spouse to see if the numbers make sense. For instance, if a relatively low income is reported but you know your spouse spends extravagantly on certain lifestyle items or has a huge house payment, chances are some money may be hidden. Kohn calls this a “four-legged clue” because the rule of thumb is that if one party reports middle class income but the family owns a horse, or anything else pricey or extravagant, it's a good clue there's a lot of hidden money somewhere.

The good news is that if your spouse is hiding money a good forensic accountant should be able to track it down. Also, if the hidden money leads to tax liabilities, the IRS has a specific provision dealing with that. It's known as the innocent spouse rule, which may provide protection for spouses if they did not know what was going on.