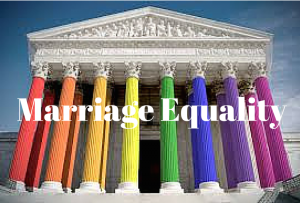 Prior to this landmark decision, only 37 of the 50 states permitted gay marriages. The United States is now the 21st country to legalize same-sex marriage. The importance of this decision is that married same-sex couples may now enjoy the same legal rights and benefits as married heterosexual couples, and they must also be recognized on official documents such as birth and death certificates. This decision, perhaps not coincidentally, was issued nearly 46 years to the day after a riot at New York's Stonewall Inn ushered in the modern gay rights movement.

Justice Kennedy's opinion spoke eloquently of the most fundamental values of family, love, and liberty, and closed with the following:

No union is more profound than marriage, for it embodies the highest ideals of love, fidelity, devotion, sacrifice, and family. In forming a marital union, two people become something greater than once they were. As some of the petitioners in these cases demonstrate, marriage embodies a love that may endure even past death. It would misunderstand these men and women to say they disrespect the idea of marriage. Their plea is that they do respect it, respect it so deeply that they seek to find its fulfillment for themselves. Their hope is not to be condemned to live in loneliness, excluded from one of civilization's oldest institutions. They ask for equal dignity in the eyes of the law. The Constitution grants them that right.

This important change did not happen overnight, and it was the result of years of tireless work by marriage equality advocates across the country, including the American Academy of Matrimonial Lawyers. The AAML filed an Amicus Curiae Brief in support of the Petitioners in this case, which you can read here. There have been numerous historic marriage decisions over the years, which the New York Times summarized here.