Are National Divorce Laws A Possibility? 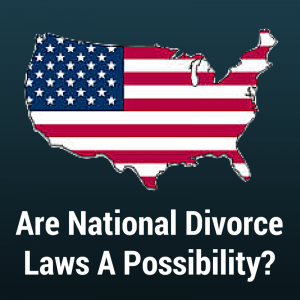 The issue of “state's rights” has been in the news a lot recently, especially given the recent Supreme Court decision making same sex marriage legal across the country and the furor over the Confederate battle flag here in South Carolina. State laws have long determined how much you spend in taxes, how your are punished for committing crime, how much you receive in welfare benefits, how much and to whom your personal property is distributed upon your death, etc. Until last Friday, state laws also determined whom you could (and couldn't) marry.

Now that state-specific laws prohibiting same sex marriage have been swept away, some are talking about doing the same thing for laws governing divorce.  The reality today is that how well people fare during a divorce has a lot to do with not only what state (and sometimes what county) they are located in at the time. In a contested divorce, a judge will apply state (or possibly even county-level) guidelines to your case, something that can result in wide divergences in the outcome.

A recent article on PBS.com examined some of the ways that different divorce laws can lead to very different results. Imagine a couple, Joe and Sally, who have been married for 25 years, decide to call it quits. Joe makes $200,000 a year while Sally makes $30,000. Assuming the couple spent the majority of their marriage in Massachusetts, Joe would be obligated under the state's alimony guidelines to pay Sally just under $60,000 a year for 17 years. Now let's pretend the couple recently relocated to Kansas. In that case, Sally would expect to receive about $38,000 a year for just under 9 years. That amounts to a 40 percent reduction on the Massachusetts total. In case you're wondering, the amount of alimony receives might receive in South Carolina could vary widely from county to county, judge to judge, and even case to case.

The question raised by critics of these differing divorce laws is why should Joe and Sally experience such wildly varying results based solely on the state or county that they reside in? Rather than allow couples to shop for the most advantageous jurisdiction for their divorce (which occurs far more often then you might think), national divorce laws could even the playing field and guarantee that couples in Massachusetts, Kansas, and South Carolina could expect similar outcomes. Though there's no sign of the courts or Congress taking such action in the near future, the recent Supreme Court ruling raises interesting questions to consider.

Source: “Is it time for a national divorce law too?,” by Laurence Kotlikoff, published at PBS.org.