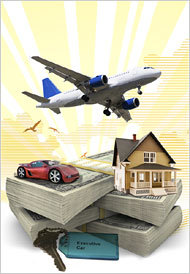 The state's highest court found that perks such as a company car, cell phone or even tickets to sporting events serve as compensation and contribute to a person's overall financial situation. As a result, they should be included in a person's complete financial picture when deciding who pays what for child support.

The case arose out a child support fight between Jeffrey Morrow and Sherri Becker. Morrow tried to get a reduction in child support saying his income had been reduced due to the recent economic downturn. However, the judges disagreed, saying that when the perks of his job were included, his income was more than enough to pay his child support obligations. The majority opinion noted that if the man's employer had not provided a car, insurance and cell phone, Morrow's expenses would have been substantially higher. Given that these perks were provided, Morrow effectively had a higher income.

Beyond payments for necessary items such as a car or insurance, the Court went as far as saying that tickets to sporting events should also be included in a person's income. For example, if a company provides employee with regular tickets to a local football team, that amounts to money saved by the employee and should be accounted for on child support worksheets.

The goal in the case is the same in child support cases here in South Carolina – to ensure that the children receive the financial support they need to thrive. South Carolina child support fights can often get nasty and if you are worried about what you might be required to pay it's a good idea to schedule a time to sit down with an experienced South Carolina family law attorney who can advise you of your options.