Professions with the Highest Risk of Divorce 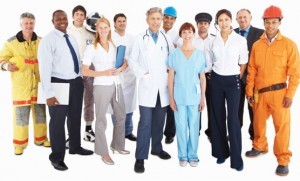 Though it may seem like divorce impacts everyone equally, a survey by the U.S. Census Bureau found that certain jobs actually have a statistically higher rate of divorce than others – some much higher. Experts say they aren't sure whether the jobs themselves lead to the increased risk of divorce or whether people with certain unstable personalities are drawn to those lines of work.

So, which professions have the highest risk of divorce? Surprisingly, the 2009 study revealed that the professional group with the highest probability of divorce is dancers and choreographers. Outside of this group, entertainers and athletes also have a risk of divorce. In many cases, the study found, divorce is impacted by a high rate of infidelity, especially among those with high-profile careers.

Another group of workers with especially high risk of divorce are those categorized as “helping” professions. This includes massage therapists, nurses, and home health aides. Experts believe that stress, long hours, and physically demanding jobs often play an important role in increasing the risk of divorce. Another problem, especially for doctors and nurses, can be the failure to leave work at work. Besides working long hours, these professions often bring troubles home, shortchanging time with their families in the process.

Law enforcement and military members are also impacted by higher-than-average divorce rates. Long deployments, which split families apart for months or years, can wreak havoc on military marriages, while stress can have a negative effect on police officers. Another problem is a common kind of controlling personality, dubbed “police personality.” Experts say that studies have found that men who refuse to share control with their wives face a stunning 81 percent risk of divorce.

Another category of workers with an increased risk of divorce includes those who are less educated and lower paid. Study after study has confirmed that those with lower levels of education are more likely to divorce than those with college degrees. One reason is that better educated workers tend to get higher paying jobs, which produce less stress on relationships.