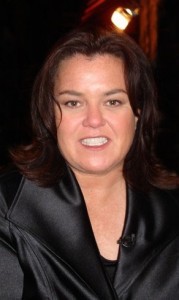 Rosie O'Donnell is in the midst of a nasty divorce from her wife, Michelle Rounds. Though the two announced their intention to split back in February, the couple recently made headlines after Rounds filed a particularly heated complaint regarding custody of their two-year-old daughter. According to the Complaint, Rounds is seeking sole custody of the girl that the couple adopted together. Rounds claims that raising the daughter without Rosie's influence will be in the best interest of the child.

To support this claim, Rounds asserts several flaws in Rosie's parenting style. First, Rounds claims that Rosie relies on nannies to do much of the actual parenting work, with a team of employees providing round the clock care. Rounds believes that parenting directly is in the best interest of the child and better than outsourcing parenting to a hired helper.

Rounds also took the opportunity to complain about Rosie's personal behavior, behavior she feels jeopardizes the welfare of the two-year-old. Specifically, Rounds claims that Rosie drinks an entire bottle of wine every night, an amount she claims to be excessive. Additionally, Rosie is alleged to smoke marijuana on a regular basis and even consume edible marijuana in an attempt to take the edge off her stressful public life.

For her part, Rosie denies all of the accusations leveled by Rounds. According to Rosie, Rounds is merely upset with the terms of the prenuptial agreement that the two signed, and she claims Rounds is attempting to utilize child custody issues to try and extract more money from the former daytime talk show host.

Though few of us have had hit TV shows like Rosie, the issues she is currently facing are not at all uncommon. In cases where relationships have soured, it is not uncommon for one party to throw mud at the other. Sometimes the accusations are true and deserve to be brought before a judge, while other times, the mudslinging is just that and only meant to hurt the other person. What parents should keep in mind is that while they are trying to hurt the other party, they may wind up hurting the child stuck in the middle. Parents should fiercely advocate on behalf of what they believe to be in the best interest of their children, but they would be well served to think long and hard before engaging in such a nasty battles to ensure they are doing so for the right reasons.