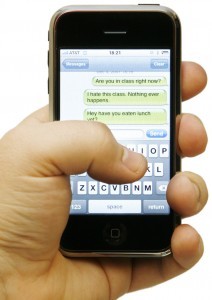 Let's face it, almost everyone with a cellphone sends text messages from time to time. This relatively new mode of communication continues to gain increasing popularity, with recent estimates from Bloomberg indicating that some 8 trillion text messages are sent every year. With that many messages flying around, it's all but guaranteed that some will impact South Carolina divorces. Keep reading to learn how and why.

Believe it or not, there are actually several important benefits of text messaging during a South Carolina family law case. For one thing, cases that prove to be exceptionally contentious typically benefit when conversations are done through text messages. Conversations in person or over the phone can often be nastier and can lead to a cycle of unpleasantness. Texting can remove some of the emotion that is present in contentious cases, and it can be an effective method of communicating important, factual information with the opposing party.

Another benefit of communicating via text is that it gives both parties time to think before responding. When you're talking with someone on the phone or in person, conversations have a way of escalating quickly. One wrong remark can cause the entire conversation to collapse into a shouting match. With texting, both sides have an opportunity to think through messages before sending them. This delay (however small) can allow time for both to cool down before responding in anger. The hope is that by allowing time to collect yourself, you can engage in a more reasonable and productive conversation.

Most importantly from a Family Court perspective, texting produces an important paper trail. Saving copies of important text messages or exchanges can be very helpful in cases where there is a pattern of harassment or where one spouse has a tendency to say things and then fails to follow through. By recording these communications, you can later use them to resolve disagreements and/or clearly support your side of the dispute.

Click here to read Part 2 about texting while divorcing, which will discuss some of the downsides of communicating by text message.