The Problems With Permanent Alimony 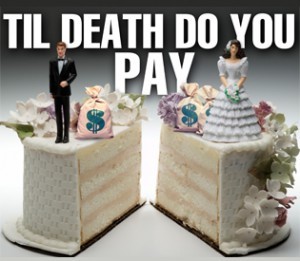 Though most people intend to stay together forever, it doesn't always work out that way. Despite the best of intentions, marriages sometimes end with couples going their separate ways. It may surprise people to discover that even when the marriage ends, you could still be tied to your former spouse forever.

One way you might be forced to have a lasting bond with your ex could be through permanent alimony. Permanent alimony (sometimes called permanent periodic alimony) is just what it sounds like, spousal support payments that continue for the rest of their lives. In most cases when permanent alimony is awarded, the only ways to terminate future payments are (1) the supported spouse gets remarried, (2) the supported spouse cohabits with a romantic interest for 90 or more consecutive days, or (3) the death of either party.

There are some cases where permanent alimony is easier to understand.  For instance, where one spouse is permanently disabled or has never held a job and has been in a long-term marriage. In other cases, where the supported spouse is able-bodied and educated, permanent alimony can seem like a tremendous injustice.

Some argue permanent alimony is a relic of the past. The first laws regarding permanent alimony were implemented when women typically did not get college educations and rarely worked outside of the home. Those days are long gone, which is why some states have either phased out or drastically reduced the instances of permanent alimony.

Source: “Taking the ‘Permanent' Out of Permanent Alimony,” by Geoff Williams, USNews.com.