What Are The Most Common Causes of Divorce? 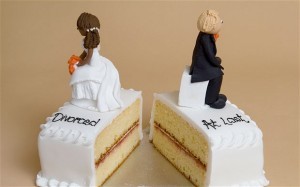 A survey of hundreds of divorced couples was recently published in the Journal of Family Issues. The study began back in 2003 and involved a pair of researchers from Pennsylvania State University asking the individuals a series of questions to try to determine the cause of their divorce. Though pinning down a single factor for such a complicated event can be difficult, the survey zeroed in on certain themes. So what do you think were the most common causes of divorce?

Though the survey broke down the results into nearly 20 different categories of problems, two of them stood head and shoulders above the others: infidelity and incompatibility. Infidelity was cited as the cause for divorce in nearly 22 percent of those surveyed. While it's troubling to think that cheating could account for such a large share of divorces, the only silver lining is that unlike other categories, this provides a relatively simple explanation for what went wrong.

Incompatibility, on the other hand, is a general term that can encompass a range of problems. Couples that were seemingly in love and then gradually discovered that the love had vanished struggled to find a more precise reason for the demise of their relationship. The catchall of incompatibility was reported to be responsible for just over 19 percent of divorces.

Beyond infidelity and incompatibility, drinking and drug use were responsible for an alarming number of divorces, almost 11 percent. Personality problems, lack of communication, and “growing apart” rounded out the top six, followed by physical abuse, loss of love and failure to meet family obligations. Beyond incompatibility, growing apart, and loss of love, several other more general issues appeared on the list, including unhappiness in the marriage, immaturity, personal growth, and even “don't know.” Adding these all up, nearly 45 percent of divorces can be attributed to some kind of personal lack of connection, rather than any serious or specific problem.