When Is My Divorce Final? 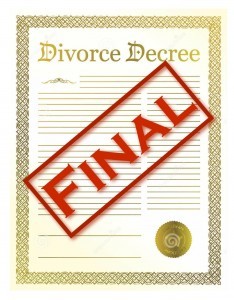 If you're in the midst of a South Carolina divorce, you already know that it can be lengthy, expensive and emotionally draining process. The official end of the divorce marks a new period of your life and, as a result, can be a welcome relief when it finally arrives. For these reasons, you're most likely wondering “when is my divorce final?”

The first step towards finalizing the divorce is the final hearing. Of course, it should go without saying that if your divorce is contested and there are issues to be resolved, this hearing is extremely important. If you have an agreement, the judge will determine whether to approve it at this hearing. In either case, you should make sure that all of the pertinent issues in your cases are addressed, including child custody and visitation, equitable division of your assets and debts, and child support and alimony.

After the final hearing, the next step is to have an Order prepared and signed by the judge. In cases where there is an agreement, the attorneys will frequently try to prepare the Order ahead of time, so that the judge can review and sign it at the conclusion of the hearing. This helps speed the process along and gets the divorce finalized quickly, which makes everyone (parties, attorneys, and judges) happy.

If the case was contested, the judge will issue instructions explaining what needs to be included in the Order. Sometimes these instructions are given at the conclusion of the hearing, while other times, particularly in complicated cases, the judge may take the matter under advisement and issue a decision days or weeks later. It is customary for the Judge to ask the attorney for the prevailing party to draft the proposed Order.

Once the final order has been signed by the judge, there's only one step left to get your South Carolina divorce over and done. The signed Order must be filed with the Clerk of Court in the county in which the action was filed. Once the papers have been signed and officially filed, your divorce will be declared final. If judge signed the Divorce Decree at the hearing, it can be filed with the Clerk as soon as the hearing is concluded and the divorce finalized that same day. Again, in more contentious cases, it can unfortunately take weeks (or longer) to get things finalized. In either case, be patient and keep focused on the fact that you will soon be divorced.